The Cakes Our Moms Made (And Some They Didn’t)

Posted at 12:36h in Humour by Sam Newdigate

That title is highly misleading. Not everyone’s mom made cakes. Sometimes it was other treats, or bought from a store or made by dad or there wasn’t much money for celebrating birthdays that year.

But with Mother’s Day being today, it was one memory that I had of moms that I just couldn’t shake. And it wasn’t just my mom. It was of many moms. (and if you keep reading you’ll get to see some of our OTL writers with their cakes!). 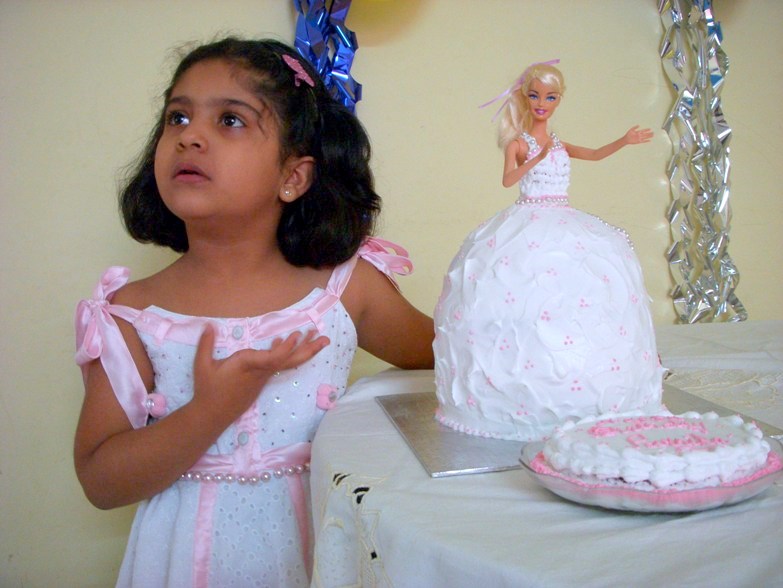 Mom, what are thooooose? You would never guess from this girl’s face but this was the ultimate cake. Via thegoldenbrownbakery.com.

There’s a lot that goes into making a successful children’s birthday cake. Generally kids have obsessions (trucks, Barbie, Frozen) and if you make a cake that follows the theme of those obsessions then you will have a very happy child.

But being asked to make a “reindeer Sven from Frozen” cake can seem a challenge. So instead of actually making a reindeer cake, it’s sometimes better (and I’m sure many a parent has done this) to instead cultivate certain cake dreams.  Maybe by making sure that if last year the theme was a big yellow circular smiley face, that this year it’s a big yellow circular sun, or whispering about plain yellow circle cakes into sleepy kids’ ears as they doze off. 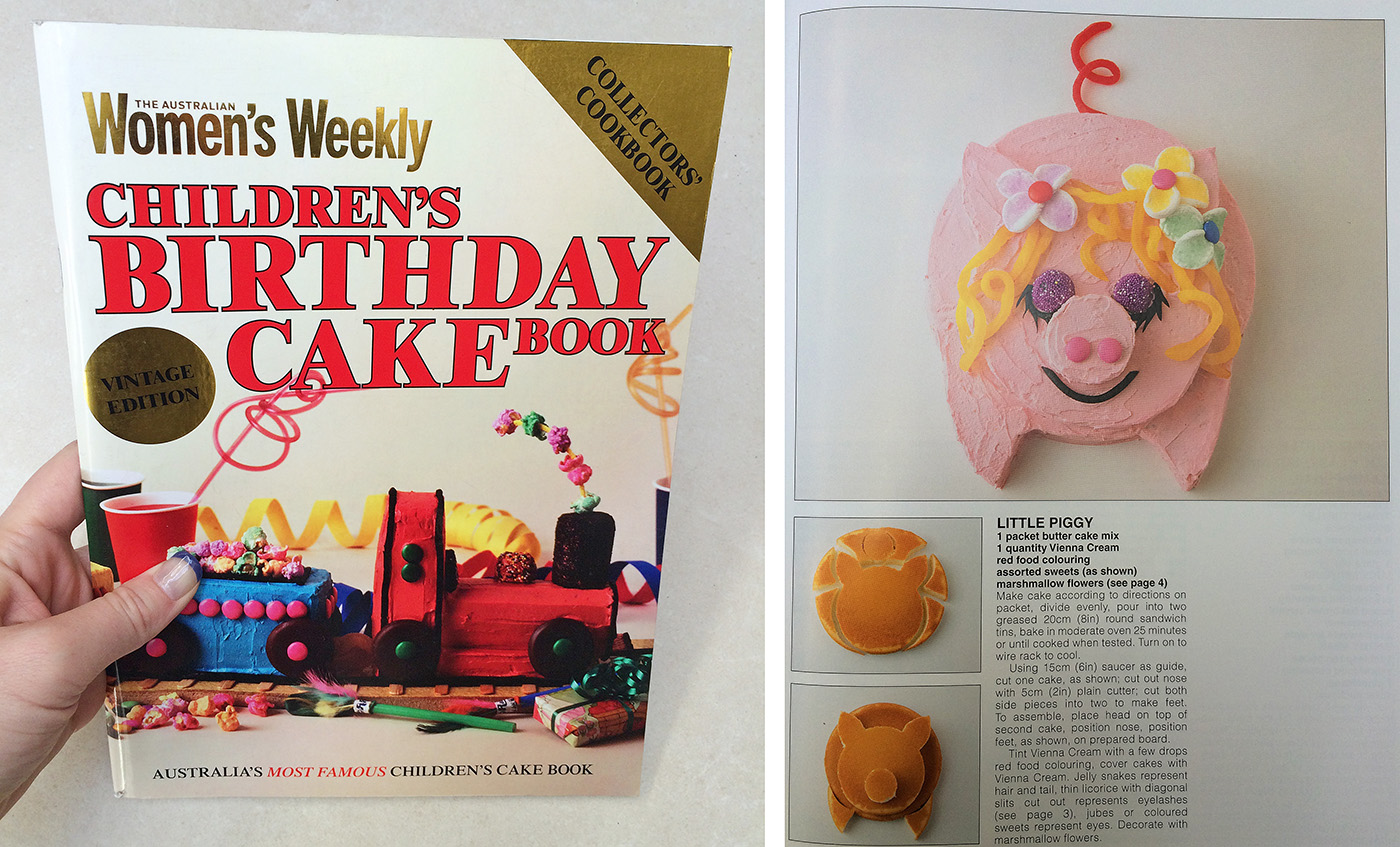 Apparently this is the book where 90s kids will find their childhoods. Making that pig looks pretty scientific. Via allthingspretty.co.za.

Along with some kind of train, the castle that was made out of upside down cones (if it took you more than two minutes to put together this cake then you were doing it incorrectly), a Lego head cake, and the cake of the kid’s favourite book; these are some of the classics:

Bonus points for using licorice for decoration and finding a circular shape for inspiration. Via abc.net.au.

Those cheap sweets you can buy in the hundreds? Perfect. Via wordpress.com.

The ones with THE ballerina 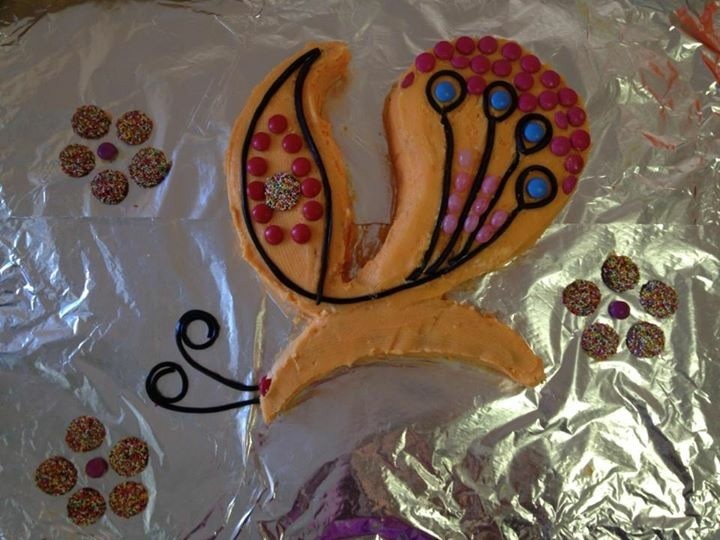 This butterfly cake is made from the a single round cake, cleverly cut. Via amazonaws.com.

This is one of our very own – Batia Efrat’s mother’s creation. Where did mothers all get the same farm animals from? Provided by Batia Efrat.

The under construction cake with diggers from the sandpit.

An awesome idea but also great because it was always a backup plan in case the dog jumped up onto the table and snatch a bit of the cooling cake. Via punkinscakeshoppe.files.wordpress.com. This guy! The hungry caterpillar. Via pinimg.com.

Those floating rings are sweets. Via latteslacedwithgrace.files.wordpress.com.

This other amazing full scene

Such pride. This green coconut was also used for every bit of grass ever imagined. Image supplied by Rebecca Dallas.

Oh man. I definitely wouldn’t have cared about skew lettering or crossed eyes but there were times when people were meant to be arriving in half an hour but the doorbell was ringing and the cake just wasn’t doing what it was supposed to.

Not a sprinkle out of place. Via instructables.com. 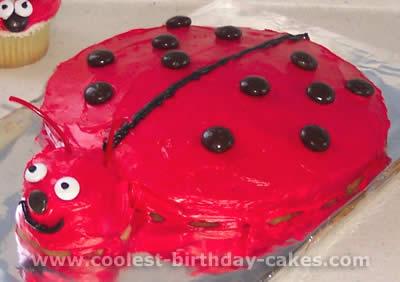 This looks like a skinned animal cake. Misleadingly via coolest-birthday-cakes.com lol! Maybe if you left the picture next to it people would stop trying to guess what it is? Via mamamia.com.au. The teeth make it horrifying. Via mamamia.com.au. I could never cut that second cake. It looks like it would bleed. Via mamamia.com.au. 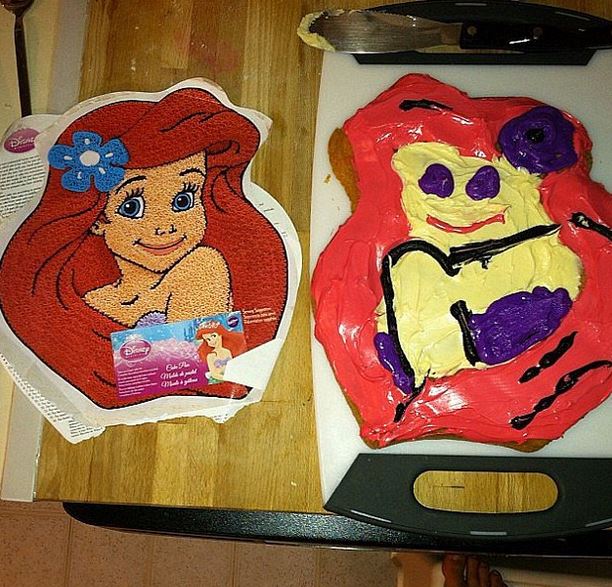 When you buy a mix and it STILL ends up like this. Via cloudfront.net.

Ja, this cake may stand out as not a fail, because it looks great and everyone seems to love it.

So, luckily we were blessed with a bit more of a close-up of these creepy little dolls who want your soul. Both images via Rebecca Dallas.

The cakes to aspire to (aka the cakes that never happened)

The cake for someone with a lot of extra time and dedication. This is from enchantedmommy.com, and that should tell you everything you need to know.

No time for that, choose. Via confessionsofacraftymum.files.wordpress.com.

Take a look at that web. You would need to cut out every little block. No. Via georginascakes.co.uk.

This image was supplied by Rebecca Dallas but it goes against all the laws of nature. If there is a 2D option then that’s what’s being made.

The other hungry caterpillar 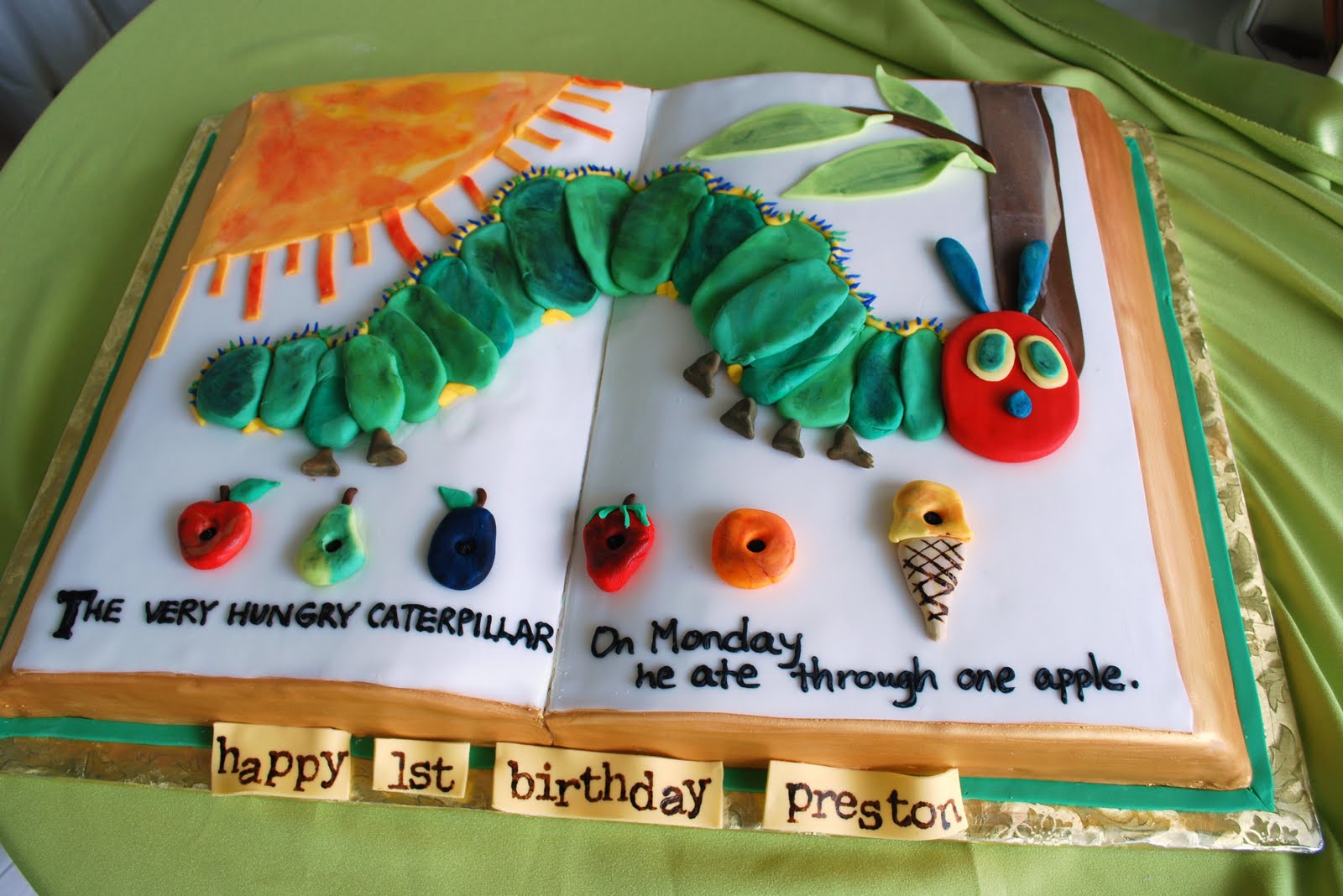 Do not confuse this for the earlier Hungry Caterpillar. No, this is a new breed of cake. Via blogspot.com.

A crossover cake? I would have been told to choose but you can actually order this cake in Cape Town from Aegean Cafe. Via akamaihd.net.

Not your mom’s normal barbie cake

This creation is still possible though? Via blogspages.com

Maybe it’s time to take your mom out to say thank you. Maybe even for coffee and a large slice of cake.