Santa the Slave Driver and His Helper Black Pete

24 Dec Santa the Slave Driver and His Helper Black Pete

Posted at 13:57h in Editorial by Nicole Wilcox

While you hang the baubles on your Christmas trees and deck the halls, somewhere in Holland people are painting their faces black, wearing bright red lipstick and afro wigs and parading as Santa’s slave helpers…

Before the big fat Americanised Santa we have come to know and love there was a Santa who arrived in a big steam boat filled with helpers with black faces. The Dutch tradition tells the story of Saint Nicholas (or the Dutch version Sinterklaas) accompanied by his servant or companion (but most likely to be servant) Zwarte Piet, which translates to Black Pete. As the story goes Black Pete became black because of all the soot in the chimney, but a few seconds of CSI and a lot of guess work many people attribute Pete’s looks to Blackface. The 99 problems of Zwarte Piet

Blackface refers to the theatrical make-up white people used to portray black people in minstrel shows. Sorry Zwarte Piet, but the soot argument is lost after you slap on some red lipstick and gold earrings. Sinterklaas and his legion of golliwogs have many people shocked as many have protested against this “racist” tradition. The problem here is the history of the blackface caricature, when plainly stated basically means “Why are people painting themselves black to celebrate Christmas??!” 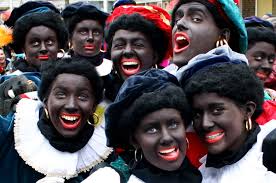 It is said that Saint Nicholas brought Zwarte Piet back from Spain after buying his freedom, which Piet was so grateful for that he remained with the saint. The others helpers are compared to Santa’s elves as every Piet has a job:

Today’s Zwarte Piet has been demoted to more menial tasks such as spreading  joy, candy and biscuits. This is certainly an upgrade from the 1800’s tradition which has Zwarte Piet giving ginger biscuits to the well behaved children or shoving naughty children in sacks to be taken back to Spain to pick oranges (wow…Christmas almost became as scary as Halloween). I honestly believe the bigger problem is not Zwarte Piet’s face, but his job description! He snatches up the naughty children! Let that be the topic for a change!

Getting gifts from Sinterklaas

The 5th of December is Saint Nicholas’ Eve and this is when gifts are given and children leave shoes in front of the fireplace hoping that Sinterklaas would fill them with gifts. Instead of milk and cookies children leave coffee for poor old Sinterklaas, carrots for the horse and a beer for Zwarte Piet. So on one night every year in the Netherlands there is a old bearded man buzzed out of his mind on caffeine, with a fat horse and a drunken Spanish helper with access to everyone’s homes and personal belongings.

This debate about Zwarte Piet has been going on for years and although I find the tradition unusual I can’t help but admire the love Dutch folk have for Sinterklaas and that damned Zwarte Piet. I say leave it be, because that tradition has been embedded too deeply already. Here to make the racist caricature seem just a little bit okay is Zwarte Piet’s version of Gangnam style.